skip to main | skip to sidebar

The Artist's Need to Evolve: Searching for Different Mediums 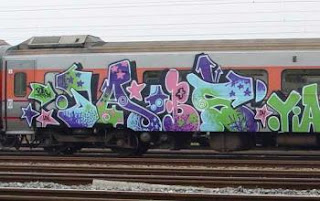 The act of choosing a public bus system to display art work reminded me of the graffiti movement, which began in the 1970's. I was reminded of the fact that many graffiti writers used public transportation to not only practice and show-off their art, but to force others to pay attention to them because they were so often ignored in other aspects of life.

According to Jeff Chang, author of "Can't Stop Won't Stop: A History of the Hip Hop Generation", "graffiti writers had claimed a modern symbol of efficiency and progress and made it into a moving violation. As their mini-riots spilled all-city, all day everyday, authorities took their work as a guerilla war on civility. They were right" (Chang 122). Chang cites historian Ivor Miller's observation that, "the northbound trains had once been a symbol of freedom, and in decaying postindustrial cities, subway trains were merely the beginning of the daily circuit of alienating labor" (122). Chang continues to describe Miller's observation by quoting Lee Quinones, a well-respected graffiti pioneer. Chang quotes:
"Subways are corporate America's way of getting its people to work. It's used as an object of transporting corporate clones. And the trains were clones themselves, they were all supposed to be silver blue, a form of imperialism and control. And we took that and completely changed it" (122).

When I read this quote, I made the connection to the decision that the artists of "Welcome to America's Finest Tourist Plantation" made to choose a moving target that, like the subways, also got people to their jobs. I thought that many undocumented workers use public transportation because they cannot drive legally with a license. I felt that the artists were not only thinking about spreading their message across the city, but that they may have been thinking about the bus in this way.

Although graffiti on public transportation was illegal, advertisers would later adopt this same type of space for marketing their products. To this day, it is common to see public buses and trains covered in digital print decal posters selling products like Coke, Virgin Records, and even movie advertisements.

Related to this concept, Avalos claims, "if the art that potentially occupies such space is to continue to be a target of this city's hostility, then public artists will increase their chances of survival by making that target a moving one... The artists wanted to create an image that would survive on the streets, existing everywhere simultaneously throughout the county yet laying claim to no single space...Aiming to illuminate the absence of public space, the artists have created a public forum within a conceptual space."
Posted by William at 8:00 PM

Want to Find Out More? Explore These Links!